The story had been haunting me for a long time, a decade or more. I’d attempted it a few times, but it never seemed to work out. For quite a while I called it ‘The House of Mirrors’. It was about something – fairytales, crows, a house – but I couldn’t really make sense of it. I spent a lot of time dreaming about the book. I wrote in mirror-writing, inside out.

I can’t remember now quite how I came up with the idea of ‘dreeming’ and Dreemy Peeple. I know it started with the dolls, the creepy dolls Anna finds in the bedrooms of her stepdad’s house. It was the brand name, stamped into their plastic casing. Then, somehow, the dreem took on a life of its own. I worked it out in various short stories that ended up in my collection, THIS HOUSE OF WOUNDS. (There’s an oblique reference to THOW in HONEYBONES – a million dinosaurs to anyone who spots it!) And finally, it started to bring forth this story.

Other things which didn’t seem quite to fit anywhere at first, like an exercise in ventriloquism from the cully king (himself a character from a much earlier story, CROW VOODOO), and then all these songs and bits of plays and other books – they all swirled about this girl, this house, this dreem. I cut 20,000 words. I cut another 20,000. When I had something that looked passingly like a story, I called it done. And – a stroke of luck – Andy Cox at TTA Press snapped it up.

That was lucky for lots of reasons. One big reason was that Andy, used to working with temperamental artists [insert eyeroll emoji here] wasn’t terribly bothered when I took the story back a few times and made some reasonably significant changes. He didn’t even mind too much (or at least he didn’t let it show) when I took it back again and re-wrote it SUBSTANTIALLY. Like changing the whole thing from third to first person, re-writing major plot points, taking out a couple of characters and, oh yes, completely changing the ending.

I couldn’t help it; I was seized by an instinct about how the book should be and I couldn’t sleep until I executed it. That last re-write took me a few days of writing, practically non-stop, sitting at my kitchen table drinking a whole lot of black coffee and not thinking, not thinking at all. When I was done, I knew I was finished for real this time and – for all its faults – HONEYBONES was as close to the story as I was going to get.

Another thing I have to be grateful to Andy for. The manuscript I sent him was a mess of different fonts, colours, amateur attempts at typographical effects. The cully king has to speak with this voice, you see; and the writing needs to fade away here; and this part should look like an old book; and and and. It was a lot. So many editors would have just said no to it all. Who do you think you are, House of Leaves? But Andy got it. He understood that it mattered for the book to look a certain way, feel a certain way, use text to tell the story. So he found a way to make it work.

I am as proud of this book as of anything I’ve written, possibly prouder, even though I maybe have no right to be. It wasn’t easy to write, except for when it was. But it pushed me. It made me experiment – sometimes from inspiration, sometimes from desperation. At other times as a ‘fuck you’ to the people and things that held me back. So forgive me if I bang on about it and spam you with links for where you can buy it (here! Buy it here!) And please don’t hesitate to ask if you need a review copy or an interview or anything else.

Here is the cover for my little book HONEYBONES, coming soon from TTA Press as part of their novella series, which will also see the brilliant Malcolm Devlin‘s ENGINES BENEATH US coming out at the same time. So please buy both books if you can!

Malcolm’s weird brother, the award-winning artist Vince Haig, did the cover illustration. I am so honoured to have had Vince illustrating several of my stories over the years. He somehow managed to tell the whole story in this picture – not an easy feat! It’s a beautiful illustration and I feel very lucky.

HONEYBONES is definitely in the realm of horror. It’s actually one of those twisted fairytales I like to claim I don’t write. It’s Bluebeard, Snow White, and The Twelve Dancing Princesses gone very, very wrong. It also features Dreemy Peeple (indeed this is where the Dreemy Peeps began) and a lot of mirrors and feathers and that sort of thing. A brief descriptive blurb says:

A troubled girl, a haunted book, a house of illusions and enchanted mirrors. Anna Carrow just wants to make things right between her and her mum, to please her stepdad, and keep out of the way of school bullies. But her efforts only seem to lead her further and further from reality, deeper and deeper into paranoia and delusion, until she finds herself tangled inside a twisted fairytale, face to face with the sinister Cully King. Now Anna has to decide which version of reality to believe in. But how can you know who to trust, when your mind is playing tricks on you?

If that sounds like the kind of thing you like, watch this space! HONEYBONES will probably be a bit like that. It’ll be available to buy very soon and I can’t wait to see what people make of it. Thanks to all for your support! 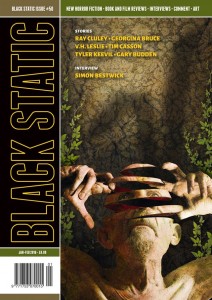 It turns out that I’m not too modest to mention that White Rabbit, my very first story in Black Static, made the cover. And what a cover! The utterly brilliant artwork is by Vince Haig, who has done another superb illustration for the story inside. One of the most wonderful experiences a writer can have is seeing their work sensitively interpreted and extended by an artist. Without a doubt, Vince Haig’s pictures make White Rabbit a better story.

Small presses are a big part of the thriving culture of literary genre writing, and deserve our attention and support. Volume 50 of Black Static is out in early January, and would make an excellent New Year’s/late Christmas present for the fiction aficionado in your life. (Afictionado, surely?!) And if you like this sort of thing, get a subscription. TTA Press depends on subscriptions to be able to survive and pay their writers and artists (very important!), so there’s no better way to show your love.