I have a confession to make. Actually, it’s kind of embarrassing. I’m making light of it, but it’s serious. I’m addicted to these: 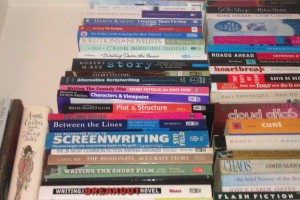 Not just books in general, but books in particular. Books about writing, to be precise.

Last night, I counted. I have 37 books about writing, plus assorted reference books and works of criticism and theory. That’s a lot, right? That’s a crazy amount.

There are books on craft – plot, structure, character, point of view, genre… All these books say the exact same things, over and over until you basically want to kill yourself. Three and five act structure. Get to know your characters. Set the scene. Don’t overdo the exposition… blah blah blah let’s all die.

Then there are the big hitters: Story, by Robert McKee; Syd Field’s Screenwriting. Actually useful if you’re writing a film, although I do suggest getting the hardback edition of Story so that you can use it to beat yourself around the head when you finally watch Adaptation, and realise that some unspeakable genius has already processed the whole thing, turned it inside out, and written a film about it. And got Robert McKee to play himself in it, which is surely the icing on the cake of genius, and a good point at which to start beating yourself around the head.

There are books like Writing Down the Bones, which is perhaps the least helpful but most poetic book about writing ever written; books that polemicise and politicise the act of writing, like Carol Bly’s The Passionate, Accurate Story; and writers’ memoirs, such as Stephen King’s On Writing, which is full of great practical advice and is highly entertaining and readable, too.

The Queen of books about writing has to be The War of Art, by Steven Pressfield. This is the book that shames, bullies and goads writers into actually sitting down and working – and laughs in the face of those who think buying/reading books about writing is anything other than procrastination and avoidance of work. I recommend it. It’s worked for me, you know?*

*I’ve totally given them up, honest I have. Well, except that Jeff Vandermeer’s Wonderbook is coming out soon, and I have to see the story fish. But that’s completely different. Completely!